The Republic of Madagascar (older name Malagasy Republic, Malagasy: Repoblikan’i Madagasikara, French: République de Madagascar) is an island country located in the Indian Ocean off the southeastern coast of Africa. The nation comprises the island of Madagascar (at 587,041 square kilometres (226,658 sq mi), the fourth-largest island in the world), as well as numerous smaller peripheral islands, the largest of which include Nosy Be and Nosy Boraha (Île Sainte-Marie).

The prehistoric breakup of the supercontinent Gondwana separated the Madagascar-Antarctica-India landmass from the Africa-South America landmass around 135 million years ago. Madagascar later split from India around 88 million years ago, allowing plants and animals on the island to evolve in complete isolation. END_OF_DOCUMENT_TOKEN_TO_BE_REPLACED

Valley of the Kings – Egypt, Africa

The Valley of the Kings, less often called the Valley of the Gates of the Kings, is a valley in Egypt where, for a period of nearly 500 years from the 16th to 11th century BC, tombswere constructed for the Pharaohs and powerful nobles of the New Kingdom (the Eighteenth to the Twentieth Dynasties of Ancient Egypt). The valley stands on the west bank of the Nile, opposite Thebes (modern Luxor), within the heart of the Theban Necropolis. The wadi consists of two valleys, East Valley (where the majority of the royal tombs are situated) and West Valley.
With the 2006 discovery of a new chamber (KV63), and the 2008 discovery of 2 further tomb entrances, the valley is known to contain 63 tombs and chambers (ranging in size from KV54, a simple pit, to KV5, a complex tomb with over 120 chambers). END_OF_DOCUMENT_TOKEN_TO_BE_REPLACED

The Museum of Egyptian Antiquities, known commonly as the Egyptian Museum, in Cairo, Egypt, is home to an extensive collection of ancient Egyptian antiquities. It has 120,000 items, with a representative amount on display, the remainder in storerooms.
The following information pertains to the state of the museum prior to the Egyptian Revolution of 2011. The museum’s Royal Mummy Room, containing 27 royal mummies from Pharaonic times, was closed on the orders of President Anwar Sadat in 1981. It was reopened, with a slightly curtailed display of New Kingdom kings and queens in 1985. Today, there are about 9 mummies displayed. One of them is the newly discovered mummy of Queen Hatshepsut. END_OF_DOCUMENT_TOKEN_TO_BE_REPLACED

The Giza Necropolis is an archaeological site on the Giza Plateau, on the outskirts of Cairo, Egypt. This complex of ancient monuments includes the three pyramid complexes known as the Great Pyramids, the massive sculpture known as the Great Sphinx, several cemeteries, a workers’ village and an industrial complex. It is located some 9 km (5 mi) inland into the desert from the old town of Giza on the Nile, some 25 km (15 mi) southwest of Cairo city centre. The pyramids, which have always loomed large as emblems of ancient Egypt in the Western imagination, were popularised in Hellenistic times, when the Great Pyramid was listed by Antipater of Sidon as one of the Seven Wonders of the World. It is by far the oldest of the ancient Wonders and the only one still in existence. END_OF_DOCUMENT_TOKEN_TO_BE_REPLACED

The Victoria Falls or Mosi-oa-Tunya (the Smoke that Thunders, and note that the ‘i’ is silent) is a waterfall located in southern Africa on the Zambezi River between the countries of Zambia and Zimbabwe.
David Livingstone, the Scottish missionary and explorer, is believed to have been the first European recorded to view the Victoria Falls — which he did from what is now known as ‘Livingstone Island’ in Zambia, the only land accessible in the middle of the falls. David Livingstone gave the falls the name ‘Victoria Falls’ in honor of his Queen, but the indigenous name of ‘Mosi-oa-Tunya’ — literally meaning the ‘Smoke that Thunders’ — is also well known. The World Heritage List recognizes both names. While it is neither the highest nor the widest waterfall in the world, it is claimed to be the largest. This claim is based on a width of 1,708 metres (5,604 ft) and height of 108 metres (354 ft), forming the largest sheet of falling water in the world. The falls’ maximum flow rate compares well with that of other major waterfalls (see table below). END_OF_DOCUMENT_TOKEN_TO_BE_REPLACED 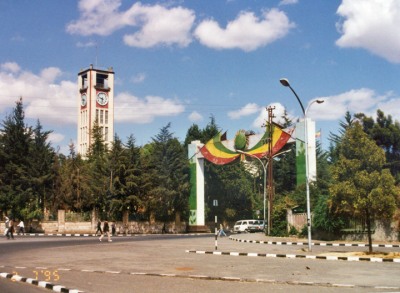 Addis Ababa (sometimes spelled Addis Abeba, the spelling used by the official Ethiopian Mapping Authority) is the capital city of Ethiopia. It is the largest city in Ethiopia, with a population of 3,384,569 according to the 2007 population census.
As a chartered city (ras gez astedader), Addis Ababa has the status of both a city and a state. It is where the African Union and its predecessor the OAU are based. Addis Ababa is therefore often referred to as “the political capital of Africa”, due to its historical, diplomatic and political significance for the continent. The city is populated by people from different regions of Ethiopia – the country has as many as 80 nationalities speaking 80 languages and belonging to a wide variety of religious communities. It is home to Addis Ababa University. The Federation of African Societies of Chemistry (FASC) and Horn of Africa Press Institute (HAPI) are also headquartered in Addis Ababa. END_OF_DOCUMENT_TOKEN_TO_BE_REPLACED 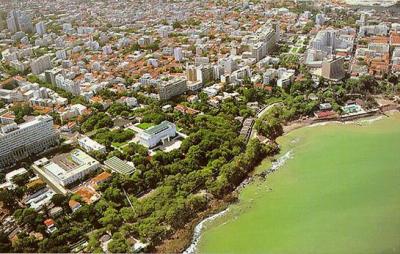 Dakar is the capital city and largest city of Senegal. It is located on the Cap-Vert Peninsula on the Atlantic coast and is the westernmost city on the African mainland. Its position, on the western edge of Africa, is an advantageous departure point for trans-Atlantic and European trade; this fact aided its growth into a major regional port.
According to December 31, 2005 official estimates, the city of Dakar proper has a population of 1,030,594, whereas the population of the Dakar metropolitan area is estimated at 2.45 million people.
Dakar is a major administrative centre, home to the National Assembly of Senegal and Senegal’s President’s Palace.
The Dakarian climate is warm. Dakar has a hot semi-arid climate, with a short rainy season and a lengthy dry season. Dakar’s rainy season lasts from July to October while the dry season covers the remaining eight months. The city sees approximately 540 mm of precipitation per year.
Dakar between December and April is usually pleasantly warm. Nights during this time of the year are comfortable. Between May and November, the city becomes decidedly warmer. However, Dakar’s weather is not quite as hot as that of African cities inland, such as Niamey and N’Djamena. END_OF_DOCUMENT_TOKEN_TO_BE_REPLACED 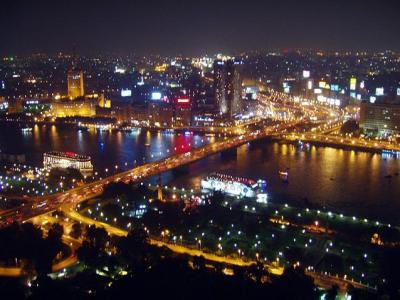 Cairo ( literally “TheVanquisher” or “The Conqueror”), is the capital of Egypt and the largestcity in the Muslim World, the Arab worldand Africa andthe 16th largest metropolitan areain the world. Nicknamed “The City of a Thousand Minarets”for its preponderance of Islamic architecture, Cairo has long been a centre of the region’spolitical and cultural life. Cairo was founded by the Fatimid dynastyin the 10th century AD.; but the land composing the present-day city was thesite of national capitals whose remnants remain visible in parts of Old Cairo.Cairo is also associated with AncientEgypt due to its proximity to the ancient cities of Memphis,Giza and Fustat which arenearby to the Great Sphinx and the pyramidsof Giza.
Egyptians today often refer to Cairoas Maṣr (Arabic:مصر‎), the Arabicpronunciation of the name for Egyptitself, emphasizing the city’s continued role in Egyptian influence. Cairo has the oldest and largest film and music industriesin the Arab World, as well as the world’s second-oldest institution of higherlearning, al-Azhar University. Many international media,businesses, and organizations have regional headquarters in the city, and the Arab Leaguehas had its headquarters in Cairofor most of its existence. END_OF_DOCUMENT_TOKEN_TO_BE_REPLACED 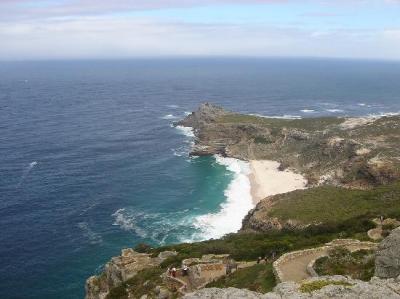 Dramaticallysurrounded by sheer craggy cliffs, Diaz Beach is situated rightat the tip of Cape Point on the western side. It deserves its reputation as oneof the most scenically stunning Cape Town beaches. Access to this beach is down a series ofwooden stairs and only takes about 20 minutes. The climb up can take twice aslong; will probably leave you breathless and sweaty but it is well worth theeffort.
Standingon Diaz Beach gazing at the relentless waves battering the 200 metre cliffs,you will be moved by the sensation of adventure and awesome power of naturethat radiates from this lovely place. On most occasions you’ll have the beachto yourself, occasionally sharing it with troops of baboons and flocks ofseabirds. Swimming on this beach can be dangerous. DiazBeach can produce excellent waves witha North Westerly wind and the right swelldirection. Surfers love it for its big, hollow, closeout barrels. Photographerslove it for its awesome beauty and many moods. Couples love it for romanticbeach walks. END_OF_DOCUMENT_TOKEN_TO_BE_REPLACED

With its five kilometre long stretch of white sand, Strand Beachis a perfect family beach for swimming, sunbathing and a variety of marinesports. There’s even a tidal pool for anyone who is not brave enough to plungeinto the mellow surf.
And if its waves you’re after, there are a number of surfspots to suit every level of surfer. Wannabee surfers can grab a lesson or twoin gentle waves with Stand Surf School- 083 232 4822.
Although the beach is mostly sandy, there are two rockpools frequented by rock and surf anglers at low tide.
The town of Strandlies right next to the beach with a plethora of beachy restaurants and drinkingspots. Access to the beach is easy and parking is never a problem.
Thetown of Strand is situated on the shores of False Bay at the foot of theHottentots Holland Mountains, an easy 40 minute drive from Cape Town. It is abustling metropolis of some 50 000 residents and forms part of the picturesqueHelderberg Basin, along with Somerset West and Gordon’s Bay. END_OF_DOCUMENT_TOKEN_TO_BE_REPLACED